A.E.K. B.C has a remarkable basketball history. Boasting two European Saporta Cup wins, Euroleague finalists and semi-finalists, and winners of F.I.B.A.’s Intercontinental Cup and first-ever Champions League along with another finals appearance, the team has much to be proud of. Yet things have not always been so rosy. In 2011, A.E.K. was relegated to the lower division of A2 after years of budget cuts done by then-owner Giannis Filipou. Even though Filipou headed Greece’s largest dairy company with an expanding global reach, he eventually had had enough of pouring millions into a team that would be targeted by crooked officiating, a league marred with match-fixing and an all too cozy triangle relationship between agents, team owners and members of the Greek Basketball Federation. The culture of Greek basketball made winning an “off the court” affair more than “on the court”. The lack of any meaningful revenue streams compounded Filippou’s decision to walk away. A.E.K.’s chances of maintaining some level of a competitive roster were doomed and the team was relegated to A2.  The following year, the team was further relegated needing to dissolve and re-organize as an amateur club. A.E.K. fans had to endure three long years to see their team win promotions back to the top tier league. 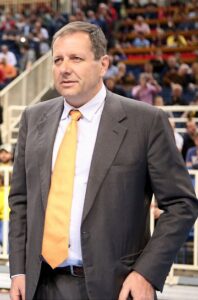 Enter Makis Aggelopoulos. A successful businessman who has strong ties to A.E.K. F.C’s owner Dimitris Mellisanidis. Aggelopoulos served as A.E.K. F.C team vice president. He was active with A.E.K. 1924, the entity which spearheaded the construction of the football team’s new stadium, and also served as vice president of the amateur association A.E.K. better known as “Mother A.E.K.”. Although not in the same economic sphere as Filipou, Aggelopoulos still invested millions. The economic crisis in Greece devaluated Greek sports teams and this undoubtedly helped the team reach their goals faster with the millions coming in. Although the organization has become better managed and A.E.K. has done exceptionally well on the court, breaking even if it happens is celebrated and the idea of any profit is nothing more than a pipe dream. Like with all investments, A.E.K.’s owner has not been immune to making mistakes yet he still shows a relentless fervor to keep investing and unlike Filipou, believes that Greek basketball will modernize. His mild mannerisms, low key persona indicate a man who prefers action and merit rather than words. But is that enough?

A.E.K.’S budget still does not come anywhere near that of rivals Olympiakos and Panathinaikos. Two teams with a history of deep financial backing and strong management, they too suffered in the aftermath of the nearly decade-long economic strife. Withered away are the 20+ million euro annual budgets of both teams. Still, their nearly 10 million annual budgets are more than 60% that of A.E.K.’s. If one adds Thessaloniki’s two historical teams, Aris and P.A.O.K. who are barely staying afloat and marred in debt, it becomes crystal clear that Aggelopoulos stands alone in his attempt to seriously add to the competitiveness in the league. Others such as Evangelos Liolios of Promitheas in Patra have in recent years made strides in building competitive teams and by constructing solid foundations however they have yet to taste any championship glory. There are others no doubt but it is safe to say that all of them have a lot of ground to cover and they must do so in much smaller markets.

So does Aggelopoulos get any respect? I don’t think so. Surely not in Greece nor in Europe for that matter. Let’s start with Europe. A.E.K. B.C. cannot compete in the Euroleague even if the team wins the Greek championship. Euroleague’s closed contractual allotment with regards to Greek teams seals A.E.K.’s fate. The fact that Olympiakos, currently playing their second year in the A2 Division, has a guaranteed spot in the Euroleague makes a complete mockery of Greek basketball. By all accounts, this doesn’t seem to phase the Greek Basketball Federation.  A.E.K. is no doubt in contention for the title again this year and if they do defeat the likes of Panathinaikos, (six-time European champion), the latter still enjoys the benefits of the Euroleague while A.E.K. must settle for the Champions League which is considerably lower in status and financial reward. Under the worse of circumstances, Panathaniakos will recoup close to 70% of their budget from the Euroleague whereas A.E.K., in order to build a team good enough to beat them domestically, needs to spend as close as possible to them but without any recourse of getting much of it back.

So why is Aggelopoulos doing it? What’s the motive behind all this?  Is it because he saw the end of Giorgios Vasilakopolos’ tenure as head of the Greek Basketball Federation? A man he has locked horns with on many occasions and who represents the old guard basketball apparatus. Even though a new law has placed an age restriction he still somehow intends to run and whose to say one of his proxies doesn’t win in the end.  Competing camps have surfaced for the federation’s leadership so one wonders if Aggelopoulos is betting on or supporting one candidate over another. One such candidate is Liolios of Promitheas! An owner vying for the federation. Does anyone see any conflict of interest in that? 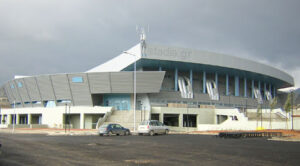 Or is he doing all this because he has also invested heavily into renovating the 9,000 seat Ano Liosia Olympic Hall converting it into A.E.K. B.C. Arena. A.E.K. fans applaud Aggelopoulos for putting together excellent teams and hoisting cups yet in pre-pandemic home games, the team barely averaged 4-5,000 fans. In 2019, A.E.K had several home game attendances under 3,000. Granted, fans too are still trying to bounce back from the economic crisis but the team had seats for sale as low as 5-10 euro making them more than affordable. None of this prevails in any other country that boasts a serious basketball tradition. We are great at demanding the best players but barely do we support our teams consistently. God forbid the team strings together a couple of losses. Doomsday arrives and the team is left to fend for itself with empty seats. In Greece, the concept of turning out to support your team when they struggle is still a novel one.

And then there are the refs. Yes, our very own high-caliber officials teaching all who care to learn the ways of the whistle without prejudice. I am kidding of course.  Not to take anything away from the effort put forth by Lavrio, but the game on the 10th of February for the Greek Cup quarterfinals was undoubtedly was one of the worst officiating in recent memory.  Lavrio, it has to be said, played a scrappy and well-thought-out game. Yet any newcomer to the sport would be pinched to see how a team scored forty-two of their ninety points from the free-throw line, fourteen consecutive at the start of the fourth period while A.E.K. had a six-point lead. The video below even for those who cannot read Greek subtitles is self-explanatory.

So much for modernizing the game.